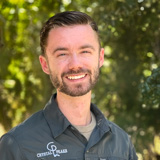 I’ve lived most of my life in Central Oregon and grown up with people who went to Crystal Peaks when they were kids. I even went to school with a board member’s son for 12 years. Naturally, I didn’t hear about the ranch until the fall of 2021. God has funny timing.

I was working in housekeeping at a resort nearby when I heard Kim give an interview on Focus on the Family. “That sounds like an amazing ministry; I’d love to learn how to do ministry from people so deeply dependent on the Holy Spirit,” I thought. “Bummer it’s probably in Colorado or Wyoming.” But when I went home and looked it up, it was right in my backyard! After a few months of thought and prayer, God finally gave me the lead to reach out and see if there was a job available. One thing led to another, and I found myself lying in the middle of the round pen, demonstrating to Silas my clear ineptitude as a horseman.

Despite my lack of experience in every, and I do mean every, aspect of my job, God had been preparing me for a place at Crystal Peaks. That’s been the abiding lesson: be still and wait for God to act. He’s shaping us every minute, however mundane, and He always redeems those seemingly wasted times in our lives when it felt like nothing was changing. There are always a million and one things vying for our attention in a day, some of which we’re even aware. But if we quiet our souls before the LORD, abide in His love, and walk in step with His Spirit, fruit will grow. Almost by accident. Like magic.

“From of old no one has heard

or perceived by the ear,

no eye has seen a God besides you,

What do you love about Central Oregon?

There’s always another gem to uncover.

What is your favorite joke?

There once was an abbey of friars that was struggling to make ends meet. The friars met together and decided the best way to save their cloistered home was to sell flowers from their beautiful garden. Folk in the nearby town had pity for the friars and were more than pleased to buy the radiant flowers. Not so pleased were the town’s florists. Their quickly emptying wallets outweighing their piety, the florists pooled their resources and hired a thug, Hugh, to resolve the issue. Under advisement from Hugh’s hefty club, the friars decided to pursue a less dangerous business endeavor. So it became something of a proverb in the town that “only Hugh can prevent florist friars.”

What is something that you are passionate about doing outside of Crystal Peaks?

Back to Our Staff »