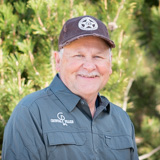 My wife, Janine, and I lived in central Kansas for all of our lives. I worked at the same aircraft company for about 30 years, and both of us were content and comfortable with where we were. We assumed that retirement and living out the rest of our lives would be done in that small, quaint Midwest town. However, when God wants you to move, He puts a burr under your saddle. The burr for us was our only child, Evan, and daughter-in-law, Stephanie, took our only grandson and moved to Central Oregon. They were called here to ministry in 2017. They packed up their belongings, sold their house and headed 1700 miles west. We knew that being this far from our closest family was going to be the equivalent of having a melon-sized cockle burr right next to our back side. We prayed, if we were going to be together, there would have to be divine intervention.

We like to say that ‘everything fell into place,’ but it was more than that. We had a life time’s worth of “stuff” we needed to get rid of or liquidate. We had to find someone to rent our house, and find a place to live in Oregon from afar. I would have to get a new job. We’d need to pack everything up, including our two cats, and move in a fairly short amount of time. We were not used to change, especially Janine, so as we took small steps, the Lord delivered big leaps. In a few short weeks, I had a new job in Redmond and we had rented a home that was the perfect fit for us. We arrived in August 2018, just days after our granddaughter was born. Only the Lord could foresee being laid off from my new job after 18 months and being left with nothing to do. I wasn’t sure what was next. I am a person that has to stay busy and the thought of retiring was the last thing that I wanted to do.

I was familiar with the ministry at Crystal Peaks and had volunteered at the Ranch previously. My daughter-in-law, Stephanie, who is the Program Director here at CPYR, supplied me with some projects to work on. Over time, my volunteering became a part-time paid position in the summer. Then in the fall, I was given the opportunity to join the staff as a member of the Facilities team. I enjoy designing, building and repairing things. I like taking something that is broken and making it like new. I feel that God has called me to share my talents with this ministry, and I can truly say that now I am comfortable with where I am and what I am doing.  No burrs here!

What do you love about central Oregon?

The thing I love most about central Oregon is that my two grandchildren, son and daughter-in-law are here. I also like the weather better than Kansas because there is less wind and lower humidity. The view of the Cascades is also very impressive, although I see Gods handy work in all of nature.

Any interesting fact about you?

I have my pilot’s license and used to own an ultralight aircraft. In my 20 years of flying, I had four incidences where I lost power and was forced to land suddenly. Luckily there was no damage. Like they say, “any landing you can walk away from is a good landing.”

Back to Our Staff »