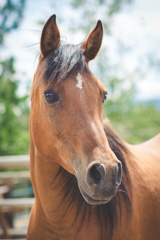 After spending time with this engaging Arabian mare and her equally needy corral mate, Kim and her team knew they could not leave them behind. They had to find a way for their release. Mercifully, the owner released the two struggling mares into our care.

In the days that followed, Kim contemplated the best name for this new addition to our herd. As she thought, her mind drifted to a fellow warrior for Christ, a beloved staff member at Crystal Peaks, Jenni Taylor-Reiling, who was facing the fight of her life.

Jenni had battled pancreatic cancer for three years. When we rescued the struggling mares, Jenni was in her final days on Earth. A faithful, joyful servant of the Gospel, Jenni had tirelessly championed the work God was doing at Crystal Peaks. In trademark Jenni, style, on January 2, 2011, our dear friend ran and jumped into the arms of Jesus.

In honor of Jenni Taylor-Reiling, Kim named her Taylor. The renaming of the beautiful, bright bay mare would maintain a piece of Jenni's legacy at the Ranch. The Biblical name “Taylor” literally means “clothed with salvation.” As this mare walked on to the Ranch, Jenni walked into the presence of Jesus and pulled on her new clothing of salvation. Taylor seemed to be the most fitting and powerful name for our new, joyful mare.

Kim hoped that calling this mare by her new name would remind others—like Jenni—to choose a life filled with joy. Despite a grueling battle with cancer, Jenni never ceased to be joy filled. And that is a legacy worth leaving.