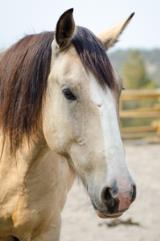 Virginia looked at me with her trademark smile and said, "I knew that if he could survive traveling 1,000 miles packed into my trailer with 100 other PMU babies who were three times his size, he was meant to be yours." Together, we made our way through her "new arrivals" corral. Over the years, Virginia and her sister have rescued hundreds of PMU (Pregnant Mare Urine) horses and brought them down from Canada and into a new life in Central Oregon.

It was late in the fall and Virginia had just returned from their annual trip with a new load of yearlings. In a voice heavy with emotion, she recounted to me how the young horses had all been gathered into a large corral to make it easier for buyers to come and purchase them. While my friends were staying at the Canadian ranch, something horrible happened. During the night marauding bears entered the corral of the weanling horses. Because the young equine were so tightly packed together, they could not escape the attacking bears. Many babies were killed. Many more were seriously wounded, some mortally so.

The dying and wounded infants were placed into a separate corral to be euthanized once the public buyers left. Virginia shared with me how she could not bear to even walk by this corral knowing that all these young horses were soon to be put down. Yet, on her way to retrieve some items from her truck, she had to pass them . . . and she dared to look.

Within the gruesome carnage encircled in the corral, there was one foal that she just simply could not look away from. He was the smallest of all, a tiny colt no more than a few weeks old. He should have still been by the protective side of his mother, not abandoned to die in a herd of mortally wounded babies. His hind end was seriously injured, but Virginia felt that he could recover if he was given a chance. All he needed was a chance.

Carefully making our way through the resting young horses, my tenderhearted friend scanned the herd for the special infant that she had just told me about. "There he is," she said as the babies parted before us. I was shocked by what I saw. He was tiny. He moved on gangly legs that seemed far too big and clumsy to be supporting such a little body. He was buckskin in color with the crowned head and feathered legs of a draft type. As he turned away from us, his injuries came into full view. Clearly, the bear had attacked him by leaping onto his back. Deep punctures and gashes could be seen on both shoulders. As the baby bolted forward, the bear slipped off the back, clawing and biting as its prey escaped. Though both hindquarters were severely injured, the left side had far more damaged.  Deep individual claw marks could be seen around what looked like a large bite, resulting in an avulsion of his hamstring.

I brought him home the following day. Even though his wounds were extensive, day-by-day we saw improvement. It took nine months for his injuries to heal. We chose to name him "Little Bear" to honor his humble beginnings and to encourage children to ask about his unique story.

Little Bear came to the Ranch as a frightened infant that was badly injured. Today, he still bears the scars of his journey through pain. And it is his scars that continue to challenge and encourage those who spend time with him that if he made it through his “personal attack,” so can his human counterparts.

From his arrival at Crystal Peaks, Little Bear has grown into a 16-hand, 1,600-pound vehicle of healing. He has been an equine leader in playing horse games, trail rides, pack trips and parade participation. Few horses on the Ranch have had a greater impact on kids who’ve also experienced personal hardship. His scars are symbolic to all that what you think is beyond survivability—isn’t—when given to God. Because nothing is impossible with God.

(More of Little Bears story can be read in Bridge Called Hope, pages 44-56).

“I will always remember the first time I met Little Bear. We had this special heart connection. Ever since I met him, I have called him ‘my horse.’” – Haylee, 11​ 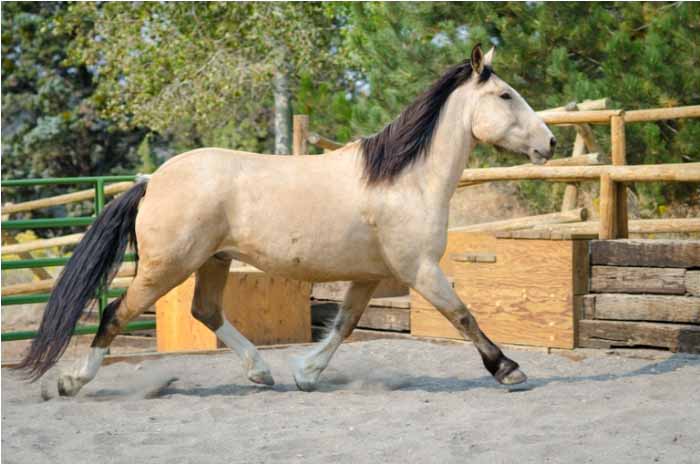