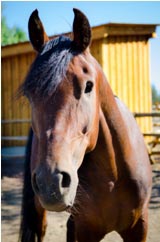 On October 18th, Troy and I were contacted concerning the recovery of a small horse found wandering in the high wilderness of the Cascade Mountains. Evident by his halter and dragging lead rope, the bay Arab gelding was clearly not wild. Instead, while he was being transported to Bend Equine Medical Center for emergency treatment, he was kind and gentle, quietly submitting to those who were trying to care for him. Based on what little information that could be gathered, it was estimated that he had been wandering for several weeks. Even for a young, small horse, he looked to be about 200 pounds underweight and was incredibly dehydrated.

Once at the hospital, it was confirmed . . . his wounds were severe.

An injury on the back of his left front cannon was so festered with rampant infection that its rotten stench filled the emergency room. A makeshift bandage of green vet wrap had grown into the leg and had effectively become a tourniquet, destroying much of the flesh beneath it. Once the layers of caked blood, puss and bio matter were removed, the tendons of his leg were clearly visible.

Even more troubling was that his left eye was completely destroyed and hanging out of socket. There was also an ominous looking depression wound behind his left eye. The gelding’s head, neck, shoulder and front leg were heavily crusted with his own blood.

X-rays revealed the unthinkable. This gentle, little horse with the kind spirit . . . had been shot in the head—TWICE!

His x-rays showed in vivid detail of how someone shot him through the left eye with a solid bullet, and then shot him again behind his left eye with a hollow point.  The trajectory of the second bullet traveled through the top of his lower jaw, shattering it, and continued on to penetrate his skull as it exploded into nearly three dozen—inoperable—fragments of jagged shrapnel.  Compounding his plight even further, his blood tests showed that he had lost fully HALF of his blood volume.

It was hard to believe, looking at him for the first time, that he had survived for an undetermined amount of time with a horrifically infected leg wound, a broken jaw, a destroyed eye and lethal blood loss, all with two exploded bullets scattered throughout his head. If this weren’t bad enough, he was also left to wander in a dense, high altitude forest while dragging a lead rope. Any one of these things should have destroyed him. Yet, here he was, standing before me, blinking inquisitively at my presence with his one remaining eye. I was overcome with the thought that . . . it was a complete MIRACLE he was standing at all!

Amid the investigation, authorities believed the impact of the second bullet knocked him unconscious and he fell to the ground. Bleeding profusely from his wound, it was presumed that during this time, he bled out half of his blood volume.  Thinking he was dead, the perpetrator left the scene.  Miraculously, the little horse woke up.  Somehow, summoning the strength to stand, he lurched to his feet and staggered away.

Yet, even though his wounds were grave—he was not.

During his months in intensive care, I visited my new friend nearly every day. Within this time, I often brushed him, or softly sang when he was in pain. Sometimes I sat quietly in his ward with a notepad on my lap. This unique time with my wounded boy made me very aware of something remarkable about him. He was courageous, he was a survivor and he fought HARD to live, to keep going. Most horses would have perished when faced with just one of his symptoms. Yet, he survived what many would believe to be unthinkable odds. The more I pondered our gelding, the more I realized how remarkably symbolic he is  . . . of so many of us.

At some point in nearly each of our lives, we go through “horrible, unthinkable” times. We feel as if we have been led out into the wilderness, perhaps by those we loved and trusted, badly beaten and left for dead.  We stumble away, wandering within the desolation of loneliness, unable to help ourselves, unable to stop the "hemorrhaging", unable to find our way home. Our horizon begins to fade into gray. Death looms.

Yet it is within this very place - within our darkest night, our deepest wilderness, our greatest despair - when our hope is bleeding out . . . if we call on His name . . . He comes.  Jesus comes into the wreckage of our heart, our blackest place, our wasteland of hopelessness . . . and He leads us home.

Like a wounded soldier returning from battle, or a little horse from the mountains, we too can choose to fall into the welcome arms of the One who loves us.  We, like the soldier or horse, might not look the same on the outside. When we come home from our "battle in the wilderness," we might be scarred or disfigured, we might carry the marks of our wounding. Yet, as one of the little ones here at the Ranch has so honestly and eloquently stated, “He knows that I love him. I told him that I don’t mind the scars on the outside . . . it’s the inside that I love.”  It’s not what the outside looks like that makes him a "hero," it’s the inside, it’s the heart . . . that’s what makes a REAL hero.

Because this little horse is so symbolic of this truth, we’ve decided to rename him “Hero” in honor of those serving our country in the military and all others who have chosen, within their wilderness, to reach for the hand of the Lord and together—step-by-step—walk home.

Fun fact: In spite of his past, Hero continues to be one of the most playful and fun-loving horses the Ranch has ever rescued. He is a four-legged reminder of what genuine forgiveness looks like.

(Hero's story can be read in its entirety in Fierce Beauty, page 101). 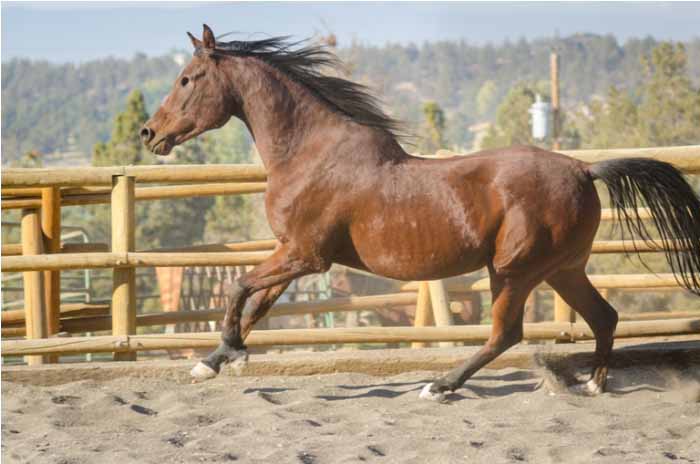