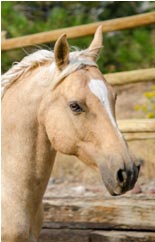 In 2001, the Ranch rescued what is, to date, the most rare horse in its history. The owner of an eight-month old Arabian stud colt called and asked for our help. The young colt kept escaping his dilapidated pens and had been seriously injured in the process. First aid attempts were complicated by the fact that a human being had never touched the young horse. Creative trailering methods were necessary to move him to the Ranch. This environment allowed us the opportunity to safely begin his gentling and vetting process.

First, his coloration for his breed is extremely rare. Until recently, Arabian horses that were born palomino could not be registered. It was widely believed that palomino was a color purebred Arabs could not produce.

Second, after such a traumatic beginning, marked with white-hot terror and searing pain, this unique gelding has served as a kind, quiet and extraordinarily gentle children's horse.

Third, what makes him remarkably rare is that he is the only horse that we have ever known to survive being hit by a semi-truck and trailer. It is completely appropriate that his name is Halo.

Halo came to Crystal Peaks as one of the wildest horses to ever set foot on the Ranch. Today, he stands as one of the foundation horses in our children’s riding program. Because of consistent loving care, Halo has transformed from a "wild-child" into a compassionate and selfless friend.

Fun fact: Halo often acts more like a dog than a horse. Kids know he is the best horse for playing "Catch me if you can!" 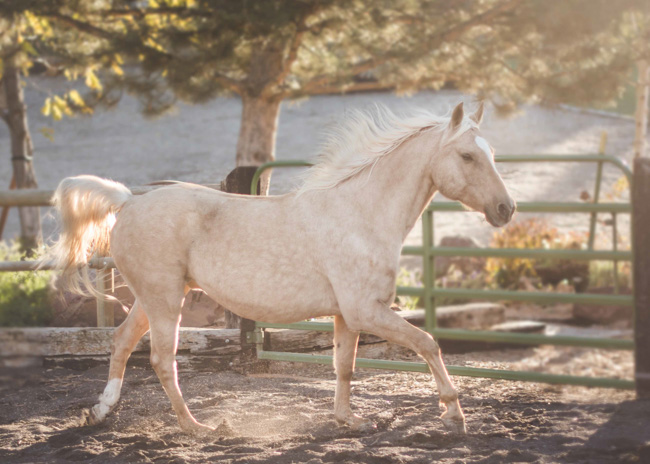