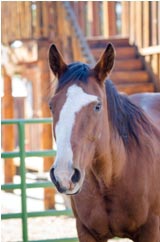 I watched as each currycomb stroke produced a perfect halo of red horsehair. Like giant dandelion spores, they drifted in the cold spring breeze across the Ranch. The quiet respite gave me time to ponder the arrival of this new horse . . .

I met Kim Dennigan in the fall of 2003. She'd just read Hope Rising and wanted to contact me about her reaction to the simple message. Over the phone, she spoke of how she lived in Pueblo, Colorado and was newly married. Like me, God had chosen a horse to enrich her life by becoming her confidant, mentor and friend.

The following spring, I met Kim and her husband, Dale, face to face. Throughout the evening, I was struck by the many similarities between us. Kim was tall with dark hair, had a direct gaze and spoke the truth with an easy smile. It was clear she was deeply in love with the hard-working man at her side and it was equally obvious how much he adored her.

In the years that followed, the Dennigan’s became faithful supporters of Crystal Peaks. One summer, Kim and Dale surprised us by turning their old truck up the Ranch driveway for a visit. We were thrilled to show them what their contributions had helped to create. No matter how much time had passed between us, every interaction was a unique gift.

Because of this truth, when the news of Kim's cancer reached us, it was a difficult blow. After three years of battling her illness, Dale called the Ranch. In a voice hoarse with grief, he told me that it was time for his beloved wife to say goodbye. Kim didn't have any children, but she'd owned a horse since its birth. The fifteen-year-old bay mare was like a beloved daughter to her. Dale spoke the request of his dying wife to me, "She was like you, Kim, just a girl and a horse. Now she is hoping you will care for her precious friend."

Through my own tears, I asked if I could speak with Kim. Her voice was so diminished that I no longer recognized it. Weak with illness and emotion, she strained to form the words, "Will you please take care of my girl? Will you allow all the love I've poured into her to fill a child's heart? I know this is what she was created to do. Oh Kim, this is so hard. Before I can say goodbye, I need to know that she will be safe and loved."

During that phone call, many tears fell in Colorado and in Oregon. Yet, behind the words of my friends, I could hear the truth of Gods word, "All praise to the God and Father of our Lord Jesus Christ. He is the source of every mercy and the God who comforts us. He comforts us in all our troubles so that we can comfort others. When others are troubled, we will be able to give them the same comfort God has given us." (2 Cor. 1:3-4).

Many people united in a swift effort to move the Dennigan mare to Central Oregon. On April second, a new equine resident made her way up the hill and into the arms of the Crystal Peaks family.

On April ninth, a dark-haired woman named Kim made her way up into the arms of Jesus and into the hearts of her eternal family.

To honor the life and love of Kim Dennigan, we've renamed her beautiful mare "Denni."

A few days later, I brought Denni out. While grooming the mare's neck and shoulder, one of my staff wandered over. She mentioned some photographs she'd taken of Denni and wanted to send on to the Dennigan’s. I turned toward her and quietly shared that Kim had already passed away. With a hug, I thanked her and turned back toward the horse tied in front of me.

Denni's response was profound—a mare I barely knew suddenly turned her neck until her forehead pressed against my chest. I heard her release a deep breath that was lower than a groan. As if to cradle a child, I held her head in my arms and silently rocked her.

Only the Lord knows whether she was responding to my sorrow or somehow understood that her beloved friend had died. Either way, the only mother she'd ever known was gone. Now she was a horse . . . without her girl.

A week later I saw something remarkable, something redeeming, something astounding. A sixteen-year-old girl had walked to the very bottom of the corral. She had done this for only one reason—to spend time with Denni. On a horse ranch designed to serve kids, this might not seem too surprising, yet what I saw inspired me to climb over the fence and watch.

God is in control, especially when things seem out of control. He is the only One who can bring beauty and purpose out of our pain.

Only a year prior, this girls father died of cancer. The only dad she'd ever known was gone. Now she was a girl without a father. I witnessed a grieving girl without a dad choosing to love and comfort a grieving horse without a mom. Watching them together, I couldn't help but wonder if this was part of God's answer to both of their hurting hearts. By living through paralleled circumstances, each fully understood the other.

Later, the young woman shared a few of her thoughts with me. She said, "Good things can happen from bad situations. God and Jesus are the Ones that help us get through these hard times. We cannot walk through life without God because without Him, we have no hope. I believe that God put Denni in my life for a reason. Maybe that reason will be to help me grow closer to the Lord and to have someone who knows how I feel. I'm not really sure of the reason yet . . . but I'm excited to find out." My thoughts rushed forward toward the simple truth that perhaps now they'll enter into that life changing relationship of simply becoming . . . "A girl and a horse."

Today, Denni continues to help lead others through their own heartache. This thoughtful mare has become a valued part of our family and we are so deeply grateful to the Dennigan’s for choosing Crystal Peaks to become her new home.

To read more about Denni, click here for Around the Fire – Summer 2011.