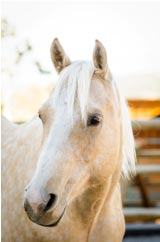 Alula, like many of the people who come to this Ranch, has had a past filled with both joy and sorrow. What we know of this tenderhearted mare is that she lived a rich life before coming to Crystal Peaks. She was deeply loved by an elderly gentleman who was in the process of training her. One day, he did not return from her corral. A short search by his alarmed family found him lying on the ground in her corral. He had passed away from natural causes and Alula was standing guard over the body of the man she adored.

Despite her overwhelming grief, courage overcame fear as the gentleman’s wife reached out for help. She called Crystal Peaks and shared her story. She spoke of her husband’s kind Quarter Horse mare who was healing from a significant shoulder injury. Upon examination, a veterinarian had determined the horse had somehow—with great force—collided into a tree. They pulled many pieces of bark from her wounded left shoulder, revealing a gash that stretched a foot long and half a foot wide. The widowed woman asked if the Ranch would be able to take this still-wounded mare into our care. Moved by compassion and the urgent medical need of this sweet horse, Crystal Peaks adopted her immediately.

Days later, after dressing injury, Kim stood in the corral with a friend observing the shape of the mare’s shoulder wound. It was jagged and radiated out in several directions.  Just as kids stare up into the sky and call out the shapes of clouds, these two women noticed the wound was healing in the shape of a star. When research yielded a beautiful star called "Alula," meaning, “first leap” they sensed this would be a beautiful and encouraging name for a horse that was recovering from a horrific shoulder wound.

Over the years, we have seen Alula’s kindness shine as bright as any star. She lovingly seeks interaction and offers friendship to all who come near. While volunteers and Ranch staff work near Alula in any paddock or pasture, they can always count on being greeted with her kind expression and curious, outstretched nose.

Alula has found a new home at the Ranch. She is loved very well by a multitude of children who think she is the best horse in the world . . . and for each who believes this . . . she is.

To read more about Alula, click here for Around the Fire - Summer 2012.