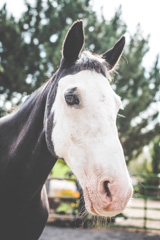 By the time hurricane Katrina made landfall, it had strengthened into a category five storm. With sustained wind speeds of over 150 mph, virtually everything in its path was in grave danger. As the levies failed and waters started to rise in southern Louisiana and Mississippi, those who were not able to move their livestock out of harm's way simply opened the gates and prayed.

The aftermath of the storm revealed that most of these animals did not survive. Most.

But, there was a remnant . . . there is always a remnant.

Of all the livestock that swam for their lives, a few found grace within the storm. A few found high ground. It was upon this high ground that they stood and waited for help to come. Some horses stood in chest deep water, others in knee-deep mud, while still others huddled hopelessly trapped within the tangled masses of destroyed trees.

It was in such a place, where the great forests succumbed entirely to the merciless wind that mercy was found. A survivor, a horse, was discovered deep within a broken prison of shattered trees. How he endured without crushing injuries beneath the fallen forest was a miracle in itself. He had been standing, waiting for help to come . . . for three weeks.

It was instantly apparent that he survived by eating the bark off all the trees that he could reach within his splintered prison. He was so deeply enmeshed in the broken jumble of horizontal trees that he had to be extricated with chainsaws.

This is how his journey began. In mid-November 2006, a beautiful black gelding with high hind white socks and a bald face stepped off the transport trailer and into a new life at the Ranch. Even though he was striking, what caught everyone's attention was something that few had ever seen before. On his front legs, surrounding both knees were very jagged stripes of white. Similar "lightning bolts" of white streaked out from under his belly as well. It was hard to look at him and not consider how he carried the ‘marks' of his ordeal on his very hide—and he is more beautiful because of it.

Since his relocation to Crystal Peaks in 2006, "Remnant" has served as one of the many foundation horses on the Ranch. With years of faithful sessions under his saddle, he has become one of the children's favorites. Not only is he a gentle horse in the arena for riding sessions, he also provides a unique black canvas for the kids to paint.

By coming to the Ranch with such a powerful story of survival, Remnant continues to emanate a profound sense of life and enduring hope to those who seek to know him.

“Remnant, you were a miracle today. Actually, you’re always a miracle.” Chavvah, age 7

“Remnant is the greatest horse I have ever known.” Ben, age 11 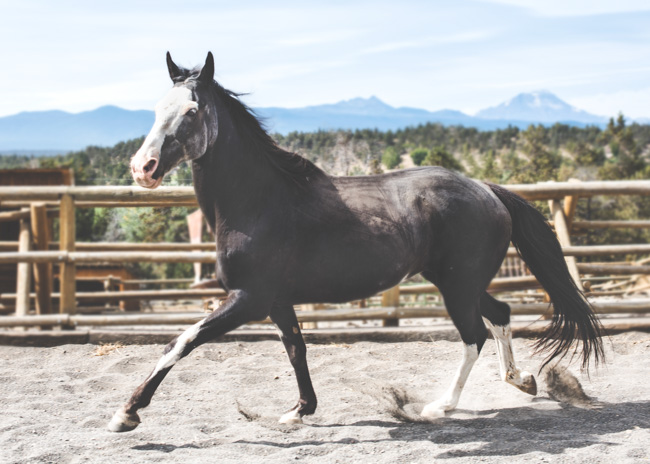 Back to Session Horses »